Some people name their stuff – their car, their boat, their body parts.  Other than pets & kids, I have never been big on naming things.  And even with pets, I have always been happy to defer to others.  (Ernie was named by the kids – it is a great name!) None of my cars had/have names.  Up until relatively recently, neither did my bikes.

Then I joined Strava (www.strava.com) for tracking my rides.  It allows you to name your bike so that you can distinguish which rides were on which bike. Since I had both a road bike and a mountain bike, this seemed useful.

My mountain bike, an aluminum Cannondale F900 was named Speed Racer, in tribute both to days past when I used to race it, and the cartoon show from my childhood.

I named my steel Bianchi Vigarello road bike after Bill the Pony, a minor character in the Lord of the Rings. Bill was a horse – slow, steadfast and reliable.  It seemed the perfect name for my bike, even more so when I used the bike to ride from Bedford, MA, to Harrisburg, PA, a distance of 590 miles over nine days in 2012.  Unfortunately Bill (the bike, not the literary character) met his demise when I picked up a stick in the rear derailleur on a routine ride on November 27, 2015, which pretzeled the rear derailleur hanger.  Now it has an honored spot hanging from the basement ceiling.

Bill the Pony was on his last legs anyways, metaphorically speaking, because the bottom bracket was making strange noises.  It was not repairable because the threads were too seized up to remove and replace, so the bike had a limited lifetime left.

This led to my current road bike, a carbon fiber Giant TCR.  I named it Willoughby, after an imaginary town in an episode of The Twilight Zone, where everyone is always happy. 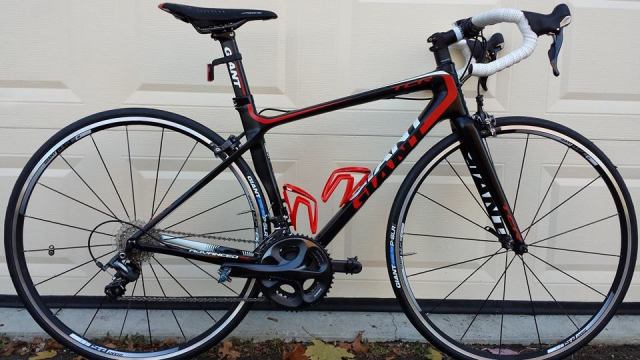 Now I am buying a new bike, a custom titanium touring bike from Seven Cycles.  What to name it? Since it is going to be painted yellow with black details, I thought of all sorts of color-themed names:  Bumble Bee, Yellow Jacket, Honey Pie.  But none of them felt right.  Nor did any other name I could come up with.  What felt right was still Bill the Pony, but there already was a Bill the Pony, hanging in the basement.  So the most respectful thing to do was name the new bike Bill the Pony II (Billy2 for short).  Hopefully, it will serve me as long and as well as my first Bill the Pony did. 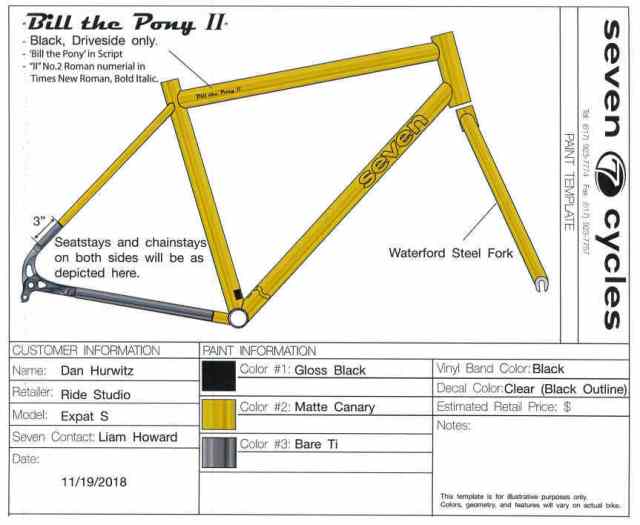 A software guy taking the time for a big ride - coast to coast.
View all posts by Dan Hurwitz →
This entry was posted in The Bike. Bookmark the permalink.